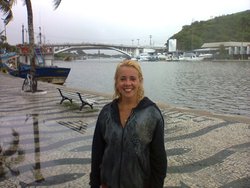 This story has all the components of a best-selling novel. Strangely enough the first clue that set the chain of events in motion came from an officer of the Church.

"My name is Jacqueline Accioly Lima Ferreira. I was born in Brazil, Recife – Pernambuco. The first hint that I ever had that I was related to the Jewish people was when a friend of mine, a Catholic priest, told me that based on my surnames, I was a descendant of the Marranos. Needless to say, I was stunned about this possibility yet at the same time curious to explore what this meant, and so I started to investigate.

You can imagine my shock when I found all of my family surnames listed in a book where they talk about Jews that adapted aliases as a result of the Inquisition. In my family we had never had any religious guidance and I had always felt that there was a secret about the religion of my mother's family, even though nobody discussed this with me. My grandparents never spoke about their parents, and whenever we tried to ask, they always changed the subject.

After that I started to study about the Jewish religion and was shocked to find that some strange family customs we had, like not eating pork, draining the blood out of meat and cleaning our house on Fridays, were actually Jewish traditions.

At about that time, my Mom moved to Miami and started working for a Jewish family, taking care of their two children. She discovered many more Jewish traditions that were the same as those she had seen as a young girl in her own home."

For Jacqui, suddenly all the pieces started falling into place. "In Brazil we have many religions, but I had never identified myself with any of them.  Sometimes I felt lost in my spiritual side. I think G-d was sending me a message, saying ' Hey, girl it’s time for you to get back where you belong.'  Even before I started to explore my past, I went to buy a pendant for my kids and they showed me lots of things, but when my eyes saw the star of David, that was it, I bought one not only for my kids but for the entire family. At that time I had no idea that the Star of David is a Jewish symbol."

Since then Jacqui continues to learn about the Jewish religion to which she is drawn.

She is impatiently planning her first trip to Israel in the coming months. Remarkably, she claims that many of her friends in South America have similar stories about their own Jewish ancestry.